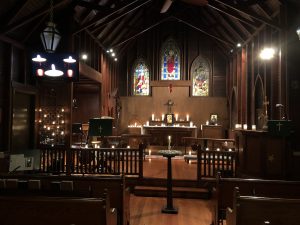 All of our regular weekly services incorporate the Holy Eucharist (Communion), since we understand the bread and wine to be the sacramental presence of Jesus Christ. This means that our sharing of the physical elements of bread and wine brings to us afresh the mystical presence of our Lord, and his Grace into our lives. The opportunity to participate in this blessing cannot be underestimated, and so we offer this sacrament frequently.

The Sunday 10 am service incorporates music leadership by our contemporary music group, and recorded organ music. This service is about 1 hour 15 minutes.

During the Reformation in the 16th Century, Henry VIII declared the Church of England independent of the Roman Catholic Church with himself as its head. It was the result of many factors, some political and some theological, but it has given rise to a distinct form of Christianity, known as Anglicanism.

The member churches of the Anglican Communion are joined together by choice in love, and have no direct authority over one another. The Archbishop of Canterbury, the head of the Church of England, is acknowledged as the spiritual head of the Anglican Communion, but while respected, the Archbishop does not have direct authority over any Anglican Church outside of England.

While there are other churches that call themselves “Anglican,” only one Church in any country can be considered “in full communion” with the Church of England, and the Episcopal Church is the American member of the Communion.

What makes us Anglican?